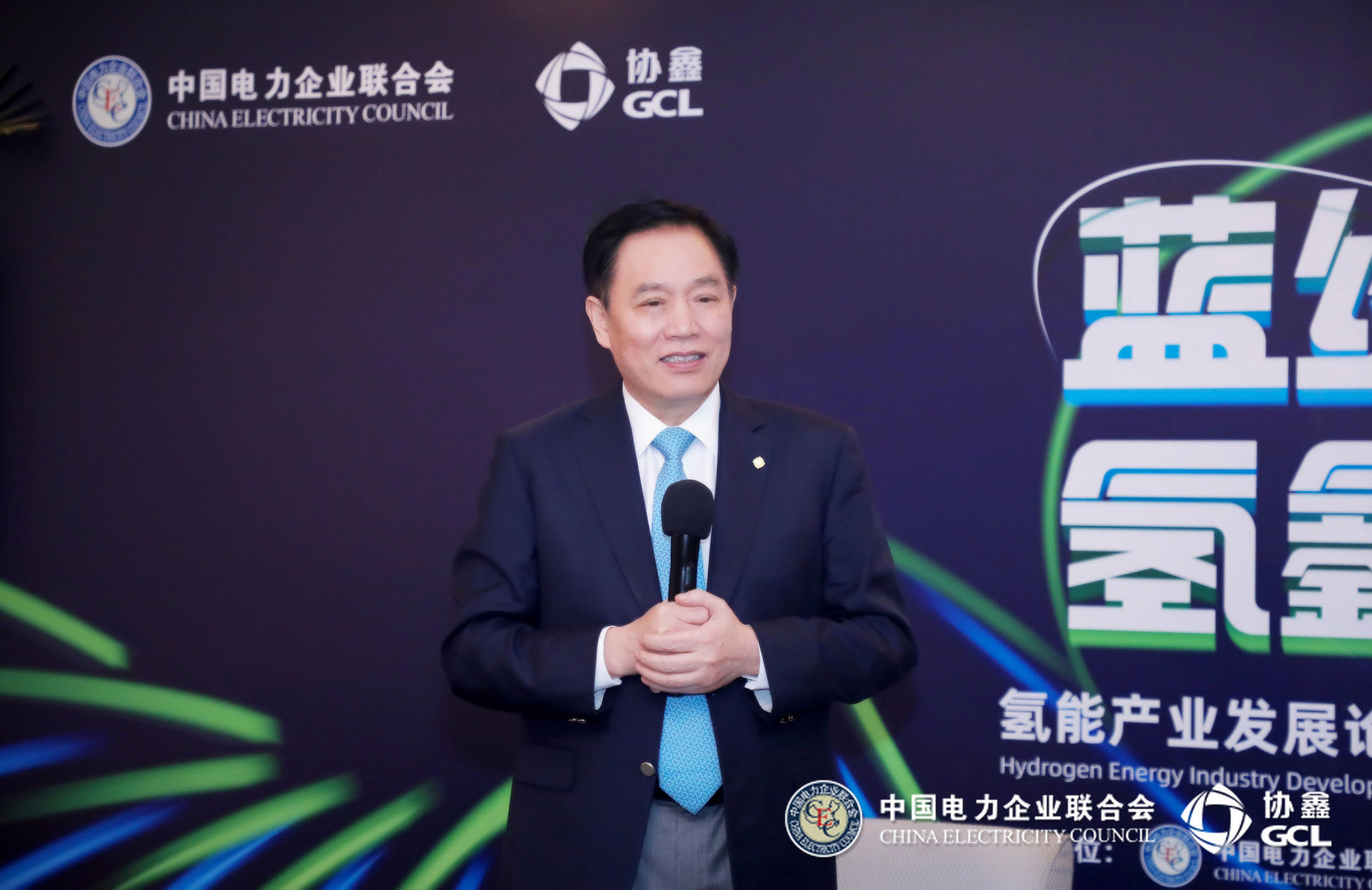 Good afternoon! First, thank you all for taking the trouble to come to the Hydrogen Energy Industry Development Forum and GCL Hydrogen Strategy Launch Conference, guided by China Electricity Council and hosted by GCL Group. We have indeed a full house here. Present among us, we have ex-leaders from National Energy Administration, executives from China Electricity Council, academicians from China Academy of Engineering, professors from our top universities, Deputy Ambassador of Embassy of Ethiopia in China, leaders of the Management Committee of Xinjiang Zhundong Economic and Technological Development Zone coming from the Gobi Desert 2,800 Kilometers away, as well as our peers, partners and media friends who are concerned about the transition and development of GCL Group. Here, please allow me, on behalf of GCL Group, to extend a warm welcome to each and every of you, and to express my heartfelt gratitude for your attention and goodwill over the time toward GCL and me personally.

Today the theme of our forum and conference is “Blue and Green Run Parallel, GCL Shapes Hydrogen Energy Landscape”. In the context of the dual carbon goals, a diverse portfolio of renewables including wind, solar and hydrogen storage is being created in the energy shifting arena. We are facing a brand-new era of hydrogen energy.

In the field of blue hydrogen, GCL has started its investment and deployment over 10 years ago. Joining force with POLY and other large central state-owned enterprises, financed by national financial platforms like China Development Bank and China-Africa Industrial Cooperation Fund, in line with the “Belt and Road” strategy, GCL has focused specially on upstream and midstream resources for blue hydrogen advancement. On November 16, 2013, POLY-GCL Petroleum Group Holdings Ltd. signed five oil and gas production sharing agreements with the Ethiopian government, under which POLY-GCL acquired eight exploration blocks and two development blocks, an acreage of natural gas reserves equivalent to an area 1.5 times of Jiangsu Province. This marked the official launch of the “Belt and Road”major international energy cooperation project, consisting of Ethiopian natural gas exploration and development, the Ethiopia-Djibouti long-distance pipeline, and the Djibouti processing base. The upstream resource blocks of the project are located in the Ogaden Basin in East Africa, with natural gas resources of 5 trillion cubic meters, oil resources of 4 billion tons, and proven natural gas reserves of 190.7 billion cubic meters. The first phase is to have a production capacity of 3.5 billion cubic meters per year, which can meet the raw material demand for an annual output of 10 million tons of hydrogen for 40 consecutive years. It is China’s largest energy project along the “Belt and Road” in Africa, of the largest overseas land area, of the highest recoverable reserves, and of a relatively low mining cost advantage. Natural gas is designed to be transported through the pipeline from Ethiopia to GCL processing base in Damerjog free trade zone in the Capital of Djibouti, where the gas-to-ammonia and further ammonia-to-hydrogen production will be processed. The blue hydrogen produced will then be shipped to China and fuel steel smelting, chemical refining, power generation and other end-use applications. This project is a good practice of President Xi Jinping’s “Belt and Road” strategy. It will effectively promote China-Africa energy cooperation and help to boost the local economy and welfare in Ethiopia and Djibouti. Meanwhile, it will continue to play an important role in ensuring energy supply and make positive contributions to the early realization of the “dual carbon” goals.

Ever since its launch, this project has been strongly endorsed by the governments of China, Ethiopia and Djibouti. It was listed as a key project of the “Belt and Road” project reserve by the National Development and Reform Commission, and was established as a “National No. 1” construction project by Ethiopia and Djibouti. President Xi Jinping expressed his support for the project in his two meetings with the President of Djibouti. Premier Li Keqiang attended and witnessed in person the signing of the “Framework Agreement on Pipeline Development” between GCL and the Ethiopian Ministry of Mines. Chairman Li Zhanshu and other national leaders have also expressed their concern and support for the project on many occasions. Besides, the project has received support from the Chinese Ministry of Foreign Affairs, the National Development and Reform Commission, the Chinese Embassy in Ethiopia, the Chinese Embassy in Djibouti and the Economic and Commercial Counsellor's Office and other relevant national departments and foreign institutions. Large central state-owned enterprises have placed their trust on GCL for synergized cooperation, including China Civil Engineering Construction Corporation, China Railway Construction Group, China Communications Construction Group, China Merchants Group and so on. Guangdong Navigation and other cross-border shipping and logistics companies are exploring practical cooperation plans with GCL. Our blue hydrogen products will greatly help the Chinese steel industry to replace coal with hydrogen for green metallurgy and low-carbon smelting, and to speed up its green transformation in the context of “dual carbon”.

In terms of green hydrogen, GCL has been one forerunner in the global photovoltaic industry. Over the last ten years, GCL has been driving the cost-down of photovoltaic power generation, pushing PV on-grid power price to decline from high to parity and to further lower levels. Now with our unique black technology of manufacturing cutting-edge, alternative and low-carbon products such as granular silicon, GCL has seized the commanding ground in green hydrogen industry, having unparalleled advantages in cost, scaling, platforms and technique know-how. In the future, the triad of “silicon-solar-hydrogen” will become the main mode of clean energy supply. Currently, in Europe, in the Middle East and other countries, photovoltaic power prices are continuing to break the lowest record, and it has even reached less than 7 cents per kilowatt-hour in Saudi Arabia. By 2025, the unit price of on-grid photovoltaic power in 60% districts of China will be brought down to 0.13 yuan or so. The unit price of wind power can also decrease to around 0.15 yuan, while the cost of energy storage will be less than 0.2 yuan per kilowatt-hour. In the near future, the cost of new energy-based hydrogen production will soon drop to 1 yuan per cubic meter, which will greatly accelerate the realization of the dual-carbon goal. In the future, the remote and desert areas where renewable energy generation are widely deployed could become a cornucopia for hydrogen production and through a cross-regional hydrogen pipeline corridor be distributed to other areas. It could ensure a stable consumption of the renewable energy produced and speed up overall deep decarburization.

GCL’s blue hydrogen strategy and green hydrogen deployment have jointly sounded the bugle call of GCL’s entry into hydrogen energy development, forming a highly-complementary as well as a self-contained big landscape. GCL thinks big and designs big. For the networking structure, blue hydrogen will be developed in load centers in the east and south parts, while green hydrogen will be advanced in the new energy bases in the central and western regions. Blue and green run parallel, first blue and then green for a coordinated development.

At the global SNEC conference in June this year, GCL Group joint forces with Siemens China, Toshiba China, CSSC Peric Hydrogen Technology, SPIC Beijing Green Hydrogen Technology to form a strategic partnership in hydrogen energy promotion. United, this consortium will share their resources, experiences and deep expertise to create a synergetic effect. At today's conference, GCL will officially release its hydrogen energy strategy of “Blue and Green Run Parallel, GCL Shapes Hydrogen Energy Landscape”. GCL will sign strategic cooperation agreements with 11 companies at this event. And also, GCL will sign a contract with China State Construction Investment Management Company and CCB International to initiate the setup of a hydrogen energy fund. GCL will strive to form a reciprocal relationship with its partners and cultivate an ecosystem of long-term profitability. It is GCL’s vision to be subsidy-free and fully market-oriented, to be a pioneer in decarbonization, and to be a globally leading solution provider of green and blue hydrogen energy.

Distinguished leaders, experts and colleagues, hydrogen energy is an important driving force for building a multi-energy supply system based on new and clean energy in the future. Its development and utilization have steered a new round of reforms in the world energy technologies. Hydrogen defines the future. The builders of the hydrogen energy ecological chain will have a lot to do in the path of “dual carbon”. Let’s work together to create a clean world of zero carbon emissions, mitigate the effects of climate change, diminish natural disasters and protect our earth.